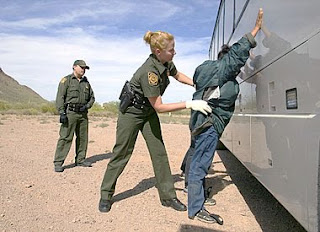 But...but...Feeling up Mexicans "junk" as they cross the border illegally would be a violation of their rights. We are only allowed to do that to law-abiding citizens.

The incoming chairman of the Republican Governors Association suggested Friday that TSA screeners would be more help securing the nation’s border with Mexico.

Texas Gov. Rick Perry said Friday on Fox Business Network that states need to “push Washington back into that box that we call the United States constitution,” but said the federal government needs to follow through on its responsibility of securing the U.S. border.

“Just in the last two weeks, I’ve had five of my citizens who’ve lost their lives on that border with Mexico, and that is an irresponsible lack of focus by our federal government,” Perry said, calling the federal security an “abject failure.”

When asked if, in the wake of the TSA invasive pat-down controversy, he’d replace TSA screeners as states are allowed under federal law, Perry had an idea.

LOL! Whether he was serious are sarcastic, it would make the country safer to have them on the border.

I do wonder, however, how many creepy guys are going to the airports just for a cheap thrill?

Send them to the border. We know what terrorists look like, don't we? Hasn't there been a consistent "profile"....OH NO!! Janet Incompetano would never let us use profiling!! Or dogs who can sniff out bombs with an almost 100% success rate. The only reason they haven't been 100% is a false positive or two, but they haven't MISSED one yet.

And they work for less than minimum wage.