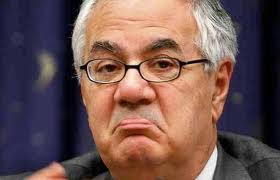 Barney Frank get tossed on the ash heap of history...


Interim Senate pick William “Mo” Cowan today vowed his political career would be short — and ruled out all future plans to run for office — as he prepares to take over for U.S. Sen. John Kerry for the next five months.

“This is going to be a very short career,” said Cowan. “I am not running for office. I’m not a candidate for public service at any time today or in the future.”

Cowan beat out a list of challengers, including Barney Frank, who had been at the center of an intense lobbying effort by progressive groups pushing his nomination.

“There were other very capable candidates on the list — including Congressman Frank,” said Patrick. “All of whom, because of how capable they were, made it a difficult choice.”