UK gets their Independence Day! 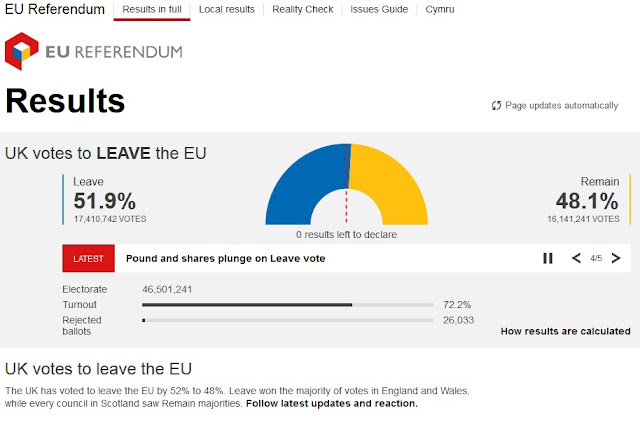 Tweet of the Day: Fauxcahontas Joins The House Dem Sit In…

Bernie Sanders pays his interns only $12 an hour.

I thought $15 was the Socialist living wage.


Bernie Sanders encouraged millennials to apply for a Senate internship with his office this fall, offering a $12 per hour stipend, an amount that falls below his demands for a $15 minimum wage.
Roll Call reported Tuesday that Twitter users were quick to criticize the Vermont senator for paying interns below what he called a “living wage.”
Sanders has repeatedly condemned Hillary Clinton for favoring a $12-an-hour federal minimum minimum wage, claiming at an April Democratic presidential debate that the rate is “not good enough.”
He said the rate must be raised to $15 per hour to provide workers with a “living wage,” despite paying his interns and campaign staff less.
Still, Sanders is the only presidential candidate among the initial sixteen contenders who pays interns.
Clinton relies on free labor for her campaign internships, though she established a paid fellowship last year after The Guardian reported she had brought on experienced organizers as unpaid interns.

The U.N.’s top genocide expert waded into the toxic American debate on the massacres of 49 people at a gay bar in Orlando, Florida, and issued a thinly veiled swipe at presumptive Republican presidential nominee Donald Trump and Christian extremists for exploiting the tragedy to fuel anti-Muslim hatred.
“At a time when there was greatest need for sympathy and solidarity, I was appalled by the immediate and shameful efforts of some political and religious leaders to manipulate and politicize the events in Orlando to fuel fear, intolerance, and hatred,” Adama Dieng, the U.N. special advisor to Secretary-General Ban Ki-moon on the prevention of genocide, said Friday in a statement.
Dieng stopped short of calling out Trump by name. But he criticized calls by “some politicians to cite radical Islam as the cause of the attack in Orlando, to ban Muslims from the United States, and to label all Muslims as terrorists.”

The UN should be expelled from US soil.
Posted by Bluegrass Pundit at 6:53:00 AM No comments:

Obama believes when wolves attack, the sheep must be unarmed. Whose side is he on?


President Obama quickly grew political Thursday while speaking at a memorial site for the victims of the Orlando terrorist attack, attacking Republicans for voting against gun control laws.
“The notion that the answer to this tragedy would be to make sure that more people in a nightclub are similarly armed to the killer defies common sense,” Obama said. “Those who defend the easy accessibility of assault weapons should meet these families and explain why that makes sense.”

FBI called off Orlando shooter investigation because he was “being marginalized because of his Muslim faith,”

Can the FBI be this stupid? Well, under Obama they can.


The FBI reportedly cancelled its 2013 investigation into Orlando terrorist Omar Mateen after only 10 months because they viewed the terroristic threats he made as a reaction to “being marginalized because of his Muslim faith,” by his coworkers.
According to Fox News’ Catherine Herridge, the revelation came during a closed door meeting with FBI Director James Comey Monday afternoon.
“Director Comey confirmed to reporters this morning that there was a full FBI investigation of Omar Mateen in 2013,” she explained. “It was 10 months in length, and it was opened after he told his coworkers that he had family connections to Al Qaeda, that he was a member of a Shi’a terrorism organization and that he hoped law enforcement would raid his home and assault his wife so that he could then retaliate and martyr himself.”
Keep on reading…

Benghazi's "Tanto" on Hillary: “I don’t think she has a soul,”

We have a winner.


BRIDGEPORT — A survivor of the 2012 Benghazi siege that claimed the lives of four Americans and subject of the movie “13 Hours” repudiated Hillary Clinton Thursday night in Connecticut’s largest Democratic stronghold.
Kris “Tanto” Paronto, a military contractor and former Army Ranger, said Clinton failed as secretary of state to send in adequate reinforcements when the U.S. mission in Libya was under terrorist attack.
Part of the security team that tried to defend the compound, Paronto headlined the annual Lincoln Day fundraising dinner of Bridgeport Republicans, who make up less than 10 percent of the city’s electorate.
Paronto stopped short of endorsing the GOP’s presumptive presidential nominee, Donald Trump, but said he will work with Republicans to shine a light on what happened in the confusion of the attack that killed U.S. ambassador to Libya J. Christopher Stevens on Sept. 11, 2012.
“I don’t think she has a soul,” Paronto said of Clinton during an interview with Hearst Connecticut Media. “I hope it haunts her. I don’t think it will.”
Keep on reading…