Hey McDonald's, Why I Am Not Lovin' It

You claim your account was compromised, but you have't apologized to Donald Trump or the millions who voted for him as of this post. If you want my business again, you need to apologize, identify the culprit and file a lawsuit against them for damaging your brand name. If you don't, you are telling us you are really OK with the tweet. Also, that Obama crony you hired, Robert Gibbs, should hold a press conference and apologize. 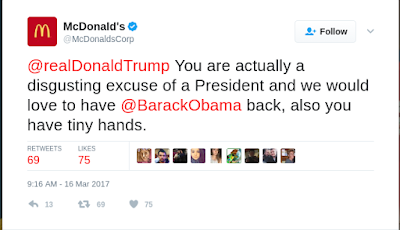 Email ThisBlogThis!Share to TwitterShare to FacebookShare to Pinterest
Labels: McDonalds

RINOcare should not be passed and here is why....

I am not angry with Ryan or Trump or any Republican, but I can't support this bill. It fails to bend the cost curve down in any significant way and when it fails democrats, the media (I repeat myself) and voters will blame Republicans. The problem is twofold. Insurance is meant to cover catastrophic costs, not be pre-payment for routine costs. This means we need catastrophic plans and medical savings accounts that could be subsidized by tax deductions or some credits. If people can save enough in their accounts, they should be allowed to withdraw the extra for anything the want. This would cause people to try to hold down costs.

The second problem is pre-existing conditions. They can't be covered under any sane plan. You can't let someone buy car insurance after they wreck their car and get it fixed. It used to be most company plans covered pre-existing conditions as long as the new member had previous coverage. This should be the standard. If someone doesn't have insurance now, they are breaking the law. Why should we reward lawbreakers by allowing them to buy insurance at a small markup when they have a serious problem.

Also, insurance companies should be allowed to sell across state lines and Americans should be allowed to buy cheaper drugs from Canada, Mexico or other countries after some quality verification tests. We should get rid of mandated coverage for certain things in insurance policies and let insurance companies and the free market decide the plans. Medicaid should be rolled back to where it was before Obamacare. It was meant to be a safety net, not substitute insurance for able-bodied adults. Drug regulations need to be reduced to speed new drugs to the market and lower costs. If revenue is needed, we should tax what we want less of, such as policies that pay routine medical costs (like Obamacare policies) and don't promote cost savings, ER visits, high priced drugs that don't save lives, MRI's and Cat scans, ect...

It would be better to let Obamacare burn than to pass the current RINOcare bill the House is considering. Obamacare is crashing and burning and democrats own it. Rates are skyrocketing and choices are becoming slim and none in many areas of the country. In two years voters will really revolt and Republicans will be able to pass a much better bill. Some Democrats might even support it.
Posted by Bluegrass Pundit at 1:20:00 PM 3 comments:

WH told Planned Parenthood they could keep their funding if the give up abortion...

Well, they claim it's only 3% of their services. It must be the most important 3% to them because they refused.

Wut? Democrats think this is inspirational?

The people trying to interfere with the 2016 U.S. election have been unmasked and they aren't Russian...

Terrible! Just found out that Obama had my "wires tapped" in Trump Tower just before the victory. Nothing found. This is McCarthyism!
— Donald J. Trump (@realDonaldTrump) March 4, 2017

This story is now breaking, but it appears that the Obama administration asked the secret FISA court for approval to wiretap Trump Tower back in the spring or early summer, but they were denied. They went back in October and the court gave them approval. If anything really significant had been found, you can bet there would have been a leak right before the election that would have driven a stake through the heart of the Trump campaign. Since there was no leak, we can guess nothing illegal was found. We can add the NSA to the alphabet agencies former President Obama weaponized against his political enemies. Of course, just because nothing illegal was found that doesn't mean nothing politically useful was found, but the question would be how to use it. Obama signed a last minute EO allowing the NSA to share more information with other intelligence agencies such as the FBI.

WASHINGTON — In its final days, the Obama administration has expanded the power of the National Security Agency to share globally intercepted personal communications with the government’s 16 other intelligence agencies before applying privacy protections.
The new rules significantly relax longstanding limits on what the N.S.A. may do with the information gathered by its most powerful surveillance operations, which are largely unregulated by American wiretapping laws. These include collecting satellite transmissions, phone calls and emails that cross network switches abroad, and messages between people abroad that cross domestic network switches.
The change means that far more officials will be searching through raw data. Essentially, the government is reducing the risk that the N.S.A. will fail to recognize that a piece of information would be valuable to another agency, but increasing the risk that officials will see private information about innocent people.

What kind of data was made available?

By contrast, the 12333 sharing procedures allow analysts, including those at the F.B.I., to search the raw data using an American’s identifying information only for the purpose of foreign intelligence or counterintelligence investigations, not for ordinary criminal cases. And they may do so only if one of several other conditions are met, such as a finding that the American is an agent of a foreign power.
However, under the rules, if analysts stumble across evidence that an American has committed any crime, they will send it to the Justice Department.
The limits on using Americans’ information gathered under Order 12333 do not apply to metadata: logs showing who contacted whom, but not what they said. Analysts at the intelligence agencies may study social links between people, in search of hidden associates of known suspects, “without regard to the location or nationality of the communicants.

Did Obama gave his plants in several federal agencies access to metadata of who called who from Trump Tower? If so, this would explains the recent leaks most which have been initially published by the Washington Post.

Trump is right. This is brings back memories of Watergate.

How low has President Obama gone to tapp my phones during the very sacred election process. This is Nixon/Watergate. Bad (or sick) guy!
— Donald J. Trump (@realDonaldTrump) March 4, 2017

“I think it didn’t matter,”

What? No call for her to resign or a special prosecutor?

Mr. Beshear, as a Kentuckian, I watched your speech in expectation you would represent KY with dignity, even if I disagreed with your opinion. I am part of the two-thirds of Kentuckians who abandoned you and your party and supported President Donald Trump. I thought you got off to a good bipartisan start by declaring yourself as a "proud Republican." Unfortunately, the prepared remarks show you merely misspoke. Your speech went downhill from there. You tout the fact 500,000 in Kentucky got health insurance under the ACA. I guess that is true if you consider Medicaid to be health insurance. It's actually medical welfare. Most of that 500k got on Medicaid. Only about 75,000 got insurance through the exchanges and most of them are being subsidized heavily on the backs of taxpayers. One in three Kentuckians now get medical welfare. That is hardly a record to be proud of.

After President Trump gave a very presidential speech, where he attacked no one, and reached out to Democrats, you launched partisan attacks on the man two-thirds of Kentuckians support.  Democrats in congress set on their hands for most of President Trump's speech. Many refused to applaud even when Mr. Trump was advocating things they support. This made them look small in comparison to our President. Your partisan attacks made you look small to. I expected better from you.

The following statement was truly disappointing.


And as a Democrat, I believe that if you work hard, you deserve the opportunity to realize the American dream, regardless of whether you are a coal miner in Kentucky, a teacher in Rhode Island, an autoworker in Detroit, or a software engineer in San Antonio.


Under your administration and Democrats control of Washington, the "American dream" of many coal mining families were utterly and completely destroyed. Although you have spoken out in support of coal mining in the past, your actions to support President Obama and the Democratic Party's 2016 nominee Hillary Clinton prove the dreams of coal mining families are nowhere near the top of your list of important things. You should be shamed to even mention them. Former President Obama promised to destroy the coal industry and he nearly succeeded. Several major coal companies went bankrupt under his and your leadership and over 83,000 coal jobs were lost. That's not a dream, Mr. Beshear. That's a nightmare.