Barack Obama is a socialist 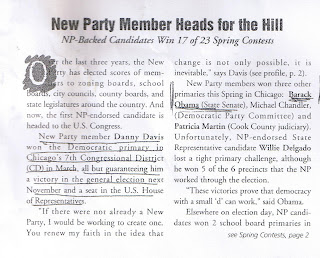 There is now conclusive proof that Barack Obama is a socialist. He was a member of the radical "New Party" in Chicago in the 1990's. Perhaps he has changed his stripes since then, but I doubt it. I am only four years older than him and my political views have changed very little in that time. You can read all about it here. They have pictures of Barack Obama at New party functions and news letter announcement identifying him as a New Party member.