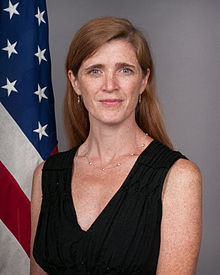 Why? So she could make better UN speeches? Did the White House janitor also have unmasking power?


The committee has subpoenaed the National Security Agency, the Federal Bureau of Investigation and the Central Intelligence Agency for information about what is called “unmasking.” Republicans on the committee have been pushing for a thorough investigation of how the names of Trump campaign officials became exposed in classified intelligence reports based off intelligence community intercepts.
Those subpoenas seek information on requests made by former national security adviser Susan Rice, former CIA Director John Brennan and former United Nations Ambassador Samantha Power for names to be unmasked in classified material. The three didn’t personally receive subpoenas, the people familiar with the matter said. Mr. Brennan, Ms. Rice and Ms. Power didn’t immediately respond to requests for comment.