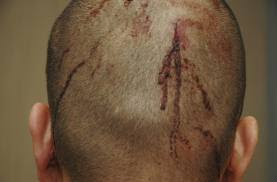 An eyewitness claims  Trayvon Martin was on top punching George Zimmerman Mixed Martial Arts style. The witness also believes the man on the bottom was the one screaming for help. My guess is manslaughter is the best the prosecution could hope for now. This witness was called by the prosecution and supposed to be supporting the prosecution's case. If they prosecutor had this information, why, other than political reasons, would she have charged Zimmerman with second degree murder?

I've seen a number of prosecutors do this. It may not be for political reasons at all. The crime must fit the specific language of the criminal statute. If it does not, you must acquit or find not guilty. Some prosecutors, if forced to prosecute a case they know they have no basis for,,they charge under an inappropriate statute knowing there will not be a conviction.