Breitbart had a large crowd of 150~200 at this restaurant for a meet-up. There was a sign out front welcoming them. After a couple of speakers talked about gun control and the border problem, the restaurant reportedly cut the microphone. The Breitbart group left. While the crowd was mostly outside waiting for the last to pay their bills, the police showed up with squad cars and a helicopter demanding the crowd disperse. Many posted bad reviews on Yelp after this event. Yelp has removed all reviews that directly mention the incident and what happened, even from those who were actually patrons of the restaurant and in attendance that night. Here is a copy of the removal email. (Bold is mine)

We’re writing because you recently posted a review of K O'Donnell's Sports Bar & Grill. We understand this business recently received media attention, and that people feel inclined to post their reactions on the business’s Yelp page. The best place to share your thoughts, however, is on Yelp Talk (http://yelp.com/talk). Ultimately, we remove reviews that appear to be motivated more by news coverage rather than one’s own customer experience with the business. With that said, we’ve removed your review, and encourage you to visit Yelp Talk to share your comments.

We apply this same policy regardless of the business and regardless of the topic at issue in order to avoid injecting our own varied viewpoints into the debate. You can read more in our Support Center: http://www.yelp-support.com/article/What-does-Yelp-do-when-a-local-business-becomes-the-focus-of-widespread-media-attention

Thanks for understanding, and we’ll see you on Yelp!

If Yelp had only removed reviews from people who weren't there, they might have a leg to stand on, but they removed all the reviews about the Breitbart incident. Here is Yelp's policy.(Bold is mine)


What does Yelp do when a local business becomes the focus of widespread media attention?

Local businesses sometimes make national news, often about something controversial.  Many people come to Yelp to share their views about the news.

We direct our users to Yelp Talk, which is an open discussion forum where people can share the full range of their reactions to the news.  Users are also welcome to post photos and reviews about the businesses in question, but we ultimately remove the ones that appear to be motivated by the news coverage itself rather than a specific firsthand customer experience (even if it means removing points of view with which we might agree).

Because we sometimes receive hundreds and even thousands of photos and reviews in response to media attention, the removal process usually kicks in over the course of the week after the issue is brought to our attention.


Strangely, this policy hasn't been applied to Memories Pizza. It is amazing how many people from California, and other states a long distance off, allegedly went to Indiana for what they claim is a 1 star pizza experience. Several of the reviews only reference the media attention when Memories Pizza allegedly wouldn't cater a gay wedding. It sure looks like Yelp has a liberal bias. Here are some examples for Memories Pizza Yelp page.. 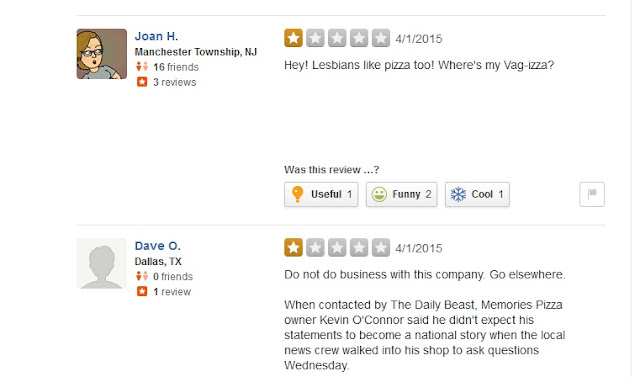 One look at their Facebook page and you can see their agenda. I was going to ask them when their policy would be applied to Memories Pizza, but I can see it would be fruitless.