Demo Colorado Gov. John Hickenlooper gets "giddy' in the presence of Obama 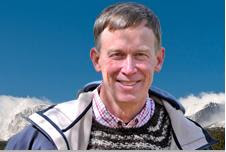 Well, at least he didn't get a tingle down his leg.


(Politico)- Colorado Gov. John Hickenlooper gushed over his meeting with President Obama — he was part of a group of Democratic state leaders who convened at the White House on Friday.

He told POLITICO’s Mike Allen that he gets “a little giddy” in the president’s presence, “just because he is such a good communicator and he has such a clear vision. It gets misinterpreted so frequently, but he is very focused on, you know, ‘How do we make those hard decisions?’”

I want to throw up.

The radical left gives me that reaction too.