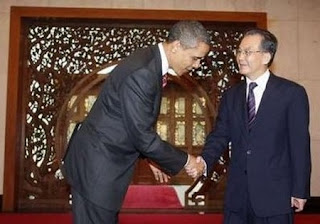 President Obama dropping the spread of American concepts of freedom and liberty to China from his new budget. Voice of America broadcasts in Mandarin and Cantonese will be stopped due to budget cuts. I wonder if if Obama got this idea from our owners China's leaders.

The decision is highly controversial and has already engendered some strong reactions among China watchers.

"Shocking and idiotic," said Arthur Waldron, professor of international relations at the University of Pennsylvania and an expert on China.

"Information is our strong point. As true news about China comes out, it will be easier for us to deal with them. Radios are very effective indeed at shaping public opinion," he said.

"I would think this was bad satire, but I fear it is true. It shows a complete lack of understanding of the world situation and correlation of forces," Waldron said.