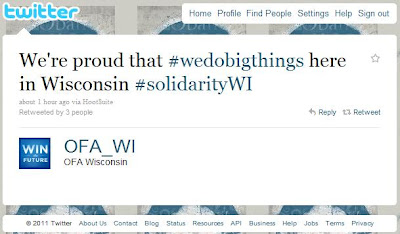 When you pull back the curtain on teacher protests in Wisconsin, you find Barack Obama's Organizing for America has been busy.


(Politico)- The Democratic National Committee’s Organizing for America arm — the remnant of the 2008 Obama campaign — is playing an active role in organizing protests against Wisconsin Governor Scott Walker’s attempt to strip most public employees of collective bargaining rights.

OfA, as the campaign group is known, has been criticized at times for staying out of local issues like same-sex marraige, but it’s riding to the aide of the public sector unions who hoping to persuade some Republican legislators to oppose Walker’s plan. And while Obama may have his difference with teachers unions, OfA’s engagement with the fight — and Obama’s own clear stance against Walker — mean that he’s remaining loyal to key Democratic Party allies at what is, for them, a very dangerous moment.

As an example, employees nationwide paid 13%~27% (see page 5) of the cost of their employer sponsored health care. Wisconsin teachers currently pay only 4%~6%.
Posted by Bluegrass Pundit at 5:44:00 PM