Actually, Al Gore is still in denial, but the evidence keeps stacking up. We have had reports of Arctic ice growth in the last year. Of course the 'global warming' theorists claimed this was dramatically offset by Antarctic ice melting. That does not appear to be true. Antarctic ice is growing too according to this Fox News report,

Ice is expanding in much of Antarctica, contrary to the widespread public belief that global warming is melting the continental ice cap.

East Antarctica is four times the size of west Antarctica and parts of it are cooling. The Scientific Committee on Antarctic Research report prepared for last week's meeting of Antarctic Treaty nations in Washington noted the South Pole had shown "significant cooling in recent decades.

Australia Antarctic Division glaciology program head Ian Allison said sea ice losses in west Antarctica over the past 30 years had been more than offset by increases in the Ross Sea region, just one sector of east Antarctica.

If that is not enough evidence, All four major global temperature tracking outlets (Hadley, NASA's GISS, UAH, RSS) have released updated data. All show that over the past year, global temperatures have dropped precipitously. 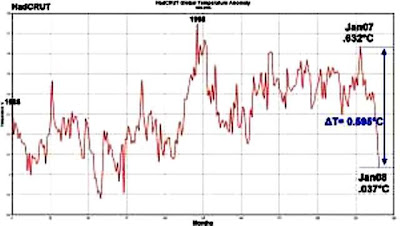 As you can see from this graph, global temperatures have been flat to slightly downward since peaking in 1998. This trend is in spite of a sharp rise in global CO2. There does not seem to be good 'cause and effect' to support carbon emission's link to global temperatures.
Posted by Bluegrass Pundit at 4:47:00 PM

You're not so naive as to think facts and logic are the tools to use in a dialog with the liberal left? The left "FEELS" what's true; they don't think about things so much as seek affirmation from the same sources that brainwashed 'em in the first place. Anytime you put the truth out there, you're preachin' to the choir. But nice blog, anyway. We're with you . . . for the old college try.

Yeah, and if you think the liberals are crazy, wait until you hear what the conservatives think is going to happen: They think God is going to come down to Israel (or is it Alaska now?) like some kind of giant tooth fairy and take away all the people who believed in him and leave behind the rest of his creations to be punished for eternity. But I heard Israel is in peace talks, so the pope is on suicide watch.

Steel Phoenix, it isn't so much thinking that liberals are crazy as that they are ignorant and ignorant of their own ignorance. For example, the pope is certainly not a fundamentalist holding to some sort rapture theology. And all conservatives are not necessarily Bible literalists (check out Darwin Central). You make the same mistake Darrow made in his debate with Chesterton. Conservatives are not as Chesterton said, "your fundamentalist aunt". But I suppose it is easier for you to win arguments against that imaginary person.

The sun is also completely inactive - not one sunspot- and it is supposed to build up towards the maximum in 2012. Read about the Maunder minimum circa 1690s - the little ice age. (It actually began in 1300 but we didn't know about sunspots until the time of Galileo.) I am far more scared of another little ice age then some warming. Plague, war, starvation, civil unrest, etc. were just some of the side effects of the little ice age. Population dropped and did not rise again until the 1800's.
Steel Phoenix - you are a very silly, prejudiced person. You think you are superior to conservatives because you are so progressive? You rant like a little boy or girl who thinks they understand everything - you are so very certain of your world view. Be careful - allow a little doubt in that closed, limited mind of yours.. You assume you KNOW conservatives. There is more diversity of opinion among conservatives than liberals even ALLOW among their party.

The universe is nearly infinite and God is bigger and more complex than your brain can possibly understand or encompass.

So Steel Phoenix, let me get this straight: You are equating global warming to a religious belief?

Here's a whole collection of inconvenient facts for you to quote, bluegrass!