When a society reaches a tipping point where the majority depend on socialistic government policies and government jobs, reform becomes almost impossible.


Between 400,000 and 500,000 teachers, nurses, firefighters, council and NHS workers, other public sector employees, students, pensioners and campaign groups from across the UK marched through central London to a rally where union officials and Labour leader Ed Miliband condemned the "brutal" cuts in jobs and services. 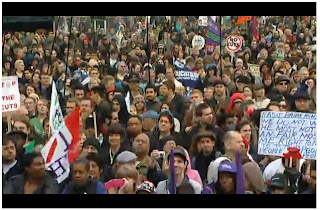 As you can see the British have already reached the tipping point. When you try to reign in the nanny state, the lefties get violent.


Violence flared away from the rally when a group of hundreds of activists, not connected with the union protest, clashed with police. They set off fireworks, threw paint and attacked shops in Oxford Street, Regent Street and Piccadilly.

If Democrats and President Obama have their way, America will soon be in the same situation. What happened in Wisconsin is just a prelude of things to come.
Posted by Bluegrass Pundit at 2:58:00 PM