Insanity: Obama plans to move ahead with remainder of health care law if mandate is struck down 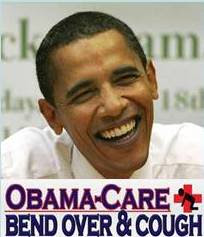 The Obama administration plans to try and implement the remaining part of their health care law if SCOTUS strikes down the individual mandate. Of course, this would cause rates in the private insurance market to skyrocket.

Nevertheless, the Obama administration will move ahead to implement major elements of the law if the individual coverage requirement is struck down, two senior Democrats told The Associated Press. One is a leading Democrat familiar with the administration's thinking, the other a high-level Capitol Hill staffer. The two Democrats spoke on condition of anonymity to avoid appearing to be out of step with the administration's public stance.
Because the law's main coverage expansion does not begin until 2014, there would be time to try to fix serious problems that losing the individual coverage requirement may cause for the health insurance industry.
Surviving parts of the law would "absolutely" move ahead, said the congressional official. A Congress mired in partisan trench warfare would be unable to repeal or amend what's left of the law, allowing the administration to advance. Much of the money for covering the uninsured was already provided in the law itself.