Obama: “I am not a perfect man and I will never be a perfect president,” 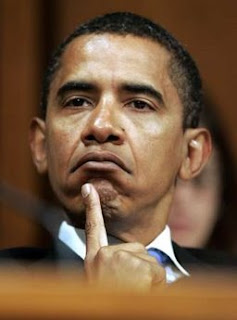 Is the Narcissist-in-Chief losing his confidence?


He told the group, “I am not a perfect man and I will never be a perfect president,” but stressed the importance of Americans working together and acknowledged his need of the crowd’s support.

“This is going to be a close election. The economy is still tough and folks are still frustrated,” Obama said. He explained the messages from the Romney campaign will be, “the economy is bad and it’s Obama’s fault,” but insisted that when he travels the country his faith is restored each day.

Laughing, he commented that in 2008 he didn’t have all the gray hair he does today but promised “I believe in you. I hope you still believe in me.”

At this point, belief in Obama would be akin to belief in Santa Claus...
Posted by Bluegrass Pundit at 5:38:00 AM