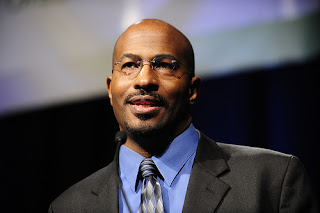 Obama made this lunatic his 'Green Jobs" czar...


Van Jones, former green czar to President Obama, suggested that the Keystone XL pipeline could harm America the way crack cocaine destroys the human body as he called for a grassroots environmentalist movement to push for cap and trade.

Jones praised the activists who fought Keystone by developing a drug metaphor. “They said, ‘we’re not going to let them jab this dirty needle of a pipeline into America. We’re not going to let them take the dirtiest energy ever created and cook it up and stick it into this country,” he said at the Take Back the American Dream conference in Washington D.C. this morning. “Through their courage, the project was derailed.” Obama and the White House have tried to limit the perception that they yielded to environmentalists on the issue, instead saying that the pipeline could be built once a suitable route is planned and approved. [...]

Jones’ crack cocaine metaphor followed his suggestion that Republican budget hawks would cause American children to die. “They say we’ve got to eliminate the EPA — just wipe it out,” he said. “The EPA, which has probably saved more American lives in the past 30 years than even the Department of Defense. The EPA which is keeping the poison out of our childrens’ bodies.”