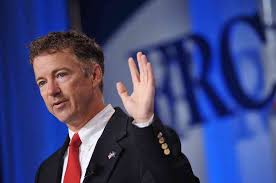 I'll bet you don't see any Democrats following his example...


Kentucky Sen. Rand Paul says he will send a $600,000 check to the U.S. Treasury, returning the part of his operating budget as a senator that was not spent.

Paul made the announcement at press conference in Kentucky on Wednesday. According to a press release from Paul’s office, the sum is over 20 percent of the total operating budget.

Last year, he returned $500,000 worth of unspent funds to the Treasury.