Shocker: One-third of sitting black lawmakers have been named in an ethics probe at some point 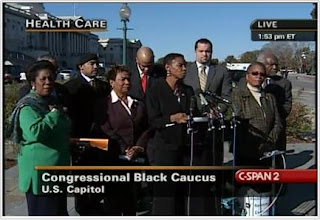 It amazes me how many CBC members get re-elected in spite of what they have done...

Rep. Jesse Jackson Jr.’s guilty plea to fraud charges raises fresh questions about the Congressional Black Caucus. It’s a group with many laudable goals, but why do so many in it succumb to corruption?

A disproportionate share of ethics cases have been brought against this exclusive club.
According to a 2012 National Journal study, five of the six lawmakers under review by the House Ethics Committee were Black Caucus members. Yet just one in 10 House members belong to the group.

In 2009, all eight lawmakers under ethics investigation were African-American. Besides Jackson, they included Rep. Charles Rangel, D-N.Y., who was later convicted of accepting gifts from donors with business before his tax-writing panel and 11 other ethics violations.

All told, the Journal says, an astonishing one-third of sitting black lawmakers have been named in an ethics probe at some point in their Hill careers.

The stat does not include former lawmakers now doing time in prison, such as ex-Rep. William Jefferson, D-La. FBI agents last decade caught Jefferson red-handed with $90,000 of bribery cash stashed in his office freezer.

Email ThisBlogThis!Share to TwitterShare to FacebookShare to Pinterest
Labels: CBC