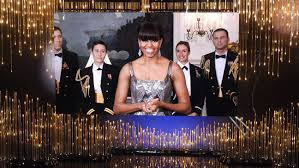 I am glad I didn't watch. Is Michelle Obama a camera hog or is she preparing for a run for national office herself?

LOS ANGELES (Reuters) - U.S. first lady Michelle Obama made a surprise and unprecedented appearance on Sunday's Oscars telecast when she presented the award for Best Picture, the first time a president or first lady has ever presented an Academy Award.

Appearing live on screen from the White House in Washington, almost 3,000 miles from the Oscars ceremony in Hollywood, Obama praised the work of the movie industry before announcing the Iran hostage drama "Argo" the Best Picture winner.

Wearing a silver evening dress, Obama said this year's nominated films had "made us laugh, made us weep and grip our armrests just a little bit tighter."

WHEN is she going away??? I am sooooo sick of seeing her (him too)

Because the Universe would have laughed its self to death if old ocrap had presented the Oscar for best picture of DEVENDING an embasy from islams.