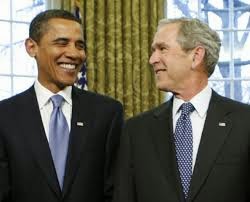 
Washington (CNN) – My, how the times have changed.
In January 2009, as President George W. Bush was days away from leaving the White House, the unpopular President’s favorable rating stood at 35% in a CNN/ORC International survey. The man who was succeeding him, Barack Obama, was fresh from his historic 2008 presidential election victory and had a 78% favorable rating among Americans.
But a new CNN/ORC International poll released Thursday indicates a milestone of sorts: Obama is now as unpopular as Bush. Fifty-one percent have an unfavorable view of Bush; 51% feel the same way about Obama. Obama’s favorable rating is now at 47% – a new low for him, and virtually identical to Bush’s 46% favorable rating, a significant improvement over his 2009 numbers.