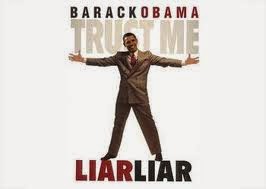 You can tell if Obama is lying by checking his mouth for movement.


President Obama surprised a few people during a news conference Thursday by claiming that the 2011 decision to withdraw all U.S. forces from Iraq, a politically popular move on the eve of an election year, was made entirely by his Iraqi counterpart. The implication ran counter to a number of claims that Obama has made in the past, most notably during a tight campaign season two years ago, when he suggested that it was his decision to leave Iraq and end an unpopular war..."With regards to Iraq, you and I agreed, I believe, that there should be a status of forces agreement," Romney told Obama as the two convened on the Lynn University campus in Boca Raton, Fla., that October evening. "That’s not true," Obama interjected. “Oh, you didn't want a status of forces agreement?” Romney asked as an argument ensued. “No,” Obama said. “What I would not have done is left 10,000 troops in Iraq that would tie us down. That certainly would not help us in the Middle East.”