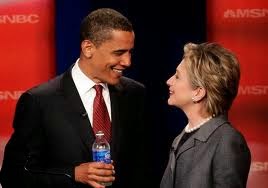 Wow! I never thought I would agree so completely with Hillary...


Hillary Clinton called President Obama “incompetent and feckless” and charged that he had “no hand on the tiller half the time” during a boozy reunion with college pals, a new book claims.
The scathing attacks came as the wine was flowing at a May 2013 dinner at Le Jardin Du Roi, a cozy French bistro near the Clinton family home in Westchester, according to “Blood Feud,” by best-selling author Edward Klein.
The former first lady, months removed from being Obama’s secretary of state, unleashed the verbal assault between sips of vino, sources told the author.