Indoctrination: Connecticut school blocks GOP and conservative websites, but not liberal ones... 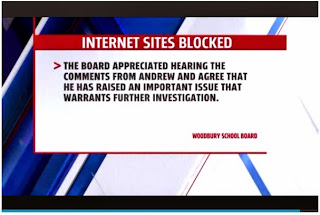 Your kids aren't getting an education, they are getting a liberal indoctrination...


A Woodbury High Schooler claims he uncovered political bias in the implementation of a firewall blocking some political Web sites at his school.
18-year-old Andrew Lampart, a senior at Nonnewaug High School, said he made the discovery when he was doing research for a classroom debate on gun control in May. Lampart said he first noticed that he could not get on the web site for the National Rifle Association.
“So, I went over to the other side. And I went over on sites such as Moms Demand Action or Newtown Action Alliance and I could get on these Web sites but not the others,” Lampart said.
Lampart investigated further, by broadening his search terms to Connecticut’s political parties.
“I immediately found out that the State Democrat web site was unblocked but the State GOP web site was blocked.”
Lampart even looked at Web sites focusing on abortion issues and religion. He found that “right-to-life” groups were blocked by the public school firewall but that Planned Parenthood and Pro-Choice America were not. He also tried to get on web sites such as Christianity.com and the Vatican’s web site but both were blocked. Islam-guide.com he found, was not.