Follow Up on MoveOn Moonbat at Rand Paul Debate

George Soros Funded MoveOn protester Lauren Valle scuffled with Rand Paul supporters in Lexington yesterday. The news headlines were "Activist stomped outside Rand Paul-Jack Conway debate." You can see the video here and decide if this really qualified as a "stomping." The woman was posing as a Rand Paul supporter in order to get close to him. The plan was to try to embarrass Rand Paul by photographing him with a RepubliCorp sign in the picture. The moonbat MoveOn protester, Lauren Valle, is apparently a professional protester who lives in Washington, DC. She was last seen getting arrested for trespass and vandalism during Green Peace's protest of the BP oil spill. 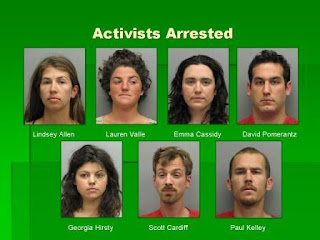 She appears to have been working for MoveOn's group RepubliCorp. I won't link them. You can Google them if you like. Their theme is the Republican Party has merged with big business and formed RepubliCorp. This seems to be a reaction to the recent Supreme Court decision opening the way for corporate campaign spending. Liberals are afraid corporations will offset their union campaign support advantage. They don't seem to have the same concern about taking George Soros' millions. You can see one of their extremely stupid videos here.
Posted by Bluegrass Pundit at 6:48:00 PM

The woman was handled a little roughly, but we don't know what occurred before the camera panned to the scuffle. Hopefully, she will get the psychiatric help she needs.

if you hold these pictures up next to pictures of the Manson "family", there's a striking resemblance.....