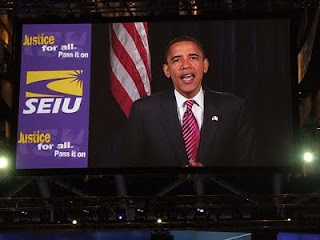 I wonder if any of this money came from foreign sources? Their buddy, President Obama, should ask them about that. He won't. The SEIU is just a thinly veiled arm of the Democratic party.

Over the last week, the Service Employees International Union (SEIU) spent at least $200,000 on billboard signs, direct mail and radio ads, according to Federal Election Commission (FEC) records. Those funds were for attacks against Republican opponents of several vulnerable House Democrats as well as against Rep. Roy Blunt (R-Mo.), who is running for retiring Sen. Kit Bond’s (R-Mo.) seat.