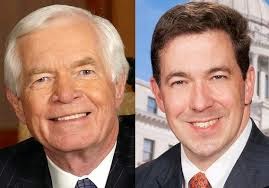 This one is too close to call as of the time of this post. McDaniel has a slight lead, but it looks unlikely either candidate will got over 50%.  This is better news for McDaniel than Cochran. Chris McDaniel has been gaining in the polls lately.


Six-term Mississippi GOP Sen. Thad Cochran and Tea Party-backed state Sen. Chris McDaniel were locked overnight in a too-close-to-call race for Cochran’s Senate seat and appear headed for a runoff later this month. McDaniel had nudged ahead of Cochran early Wednesday, with 98 percent of the state's precincts reporting. McDaniel garnered 49.6 percent of the vote to Cochran's 48.8 percent.One candidate would have needed 50 percent of the vote to win outright and avoid the June 24 runoff. The third GOP candidate, Thomas Carey, had 2 percent of the vote.Mississippi was just one of six states Tuesday holding Senate primaries, with Iowa’s GOP race considered the other closely-contested contest.The other Senate primary races were in Montana, New Jersey, New Mexico and South Dakota.