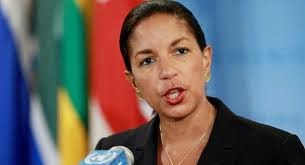 Susan Rice can't stop lying. I suspect this is why Obama likes her so much.


Colleville-sur-Mer, France (CNN) – Defending President Barack Obama’s foreign policy as one of global leadership – rather than the passive stance his critics portray – National Security Adviser Susan Rice said Friday the United States was taking important steps in Syria by offering both “lethal and non-lethal” aid to the moderate opposition fighting a bloody civil war.
Critics have cited Obama’s record in Syria as evidence of a failed foreign policy, saying his decision to forgo air strikes after Assad deployed chemical weapons displayed weakness to rivals.
Rice countered those claims by pointing to still-strong alliances between the U.S. and partner nations.
“I don’t think the criticism has been fair,” she said. “I think the fact of the matter is we’re living in complex times, there are many different challenges that the United States and the world faces. But our leadership is unmatched. Our role is indispensable.”