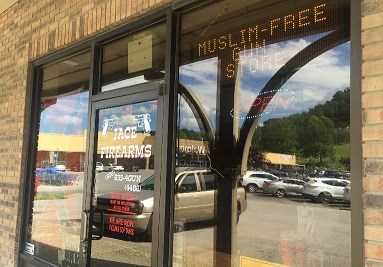 The Owner claims the sign doesn't mean he won't sell to people of the Muslim faith. Hmm...


The owners of an Eastern Kentucky gun shop made their feelings known this week, by hanging a sign that's causing quite a bit of controversy. However, the Letcher County store owners said it's their First Amendment Right to declare their business "Muslim free."

"It just says Muslim Free gun shop," said Jill Stidham. She and her husband own Jace Firearms. However, their few short words are causing quite a stir in Whitesburg.
"That's not freedom of speech, that is discrimination," said Anthony Stamper, as he walked past the store.
"He's an American and he's got his rights and he can do what he wants to," added Jordan Reynolds as he walked past the business.
Right or wrong, the owners of Jace firearms said it's their right to say what they want. Read it all...