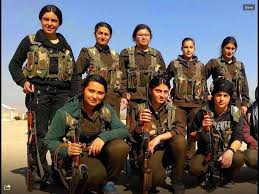 If there are any good guys in the middle East, the Kurds are in that group. They have proven to be brave and effective fighters against ISIS. Obama doesn't want them to have heavy weapons. It's almost like he is secretly rooting for ISIS.

The United States has blocked attempts by its Middle East allies to fly heavy weapons directly to the Kurds fighting Islamic State Jihadists in Iraq, The Telegraph has learnt.
Some of America’s closest allies say President Barack Obama and other Western leaders, including David Cameron, are failing to show strategic leadership over the world’s gravest security crisis for decades.
They now say they are willing to “go it alone” in supplying heavy weapons to the Kurds, even if means defying the Iraqi authorities and their American backers, who demand all weapons be channelled through Baghdad.

He's not secretly rooting for ISIS. His limp wristed approach to them shows he's openly trying to help them achieve their goals.