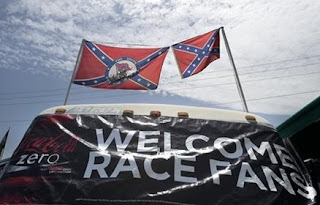 NASCAR is really stepping in it by injecting political correctness into racing. They risk angering their fan base. In addition to the Confederate flag controversy, NASCAR has severed relations with Donald Trump over his illegal immigration comments.


DAYTONA BEACH, Fla. (AP) — Steven Rebenstorf has numerous flags flying atop his canopy tent inside Daytona International Speedway.
The Confederate flag is front and center.
It's been like that for years. And the 57-year-old Rebenstorf has no plans to take it down — not even if NASCAR decides to ban the embattled flag from its racetracks.
"They'd have to come and get it," Rebenstorf said Saturday, pointing out that his American flag purposely flies a few inches higher than the rest.
Rebenstorf and others staunchly defended their Confederate flags at NASCAR's first race in the South since the racing series and its tracks urged fans to no longer wave the banner. Dozens were scattered throughout the vast infield all weekend leading to Sunday's race.