Two months of Hillary's email seems to be missing... 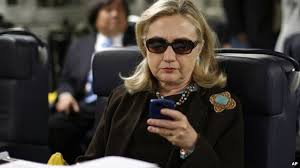 The missing email is from a critical time. 18 minutes of missing tape helped take down Nixon. Will two months of emails do the same for Hillary Clinton?

There is a two-month gap in Hillary Clinton’s emails that coincides with violence in Libya and the employment status of a top Clinton aide, Huma Abedin.
Among the approximately 2,000 emails that former Secretary of State Hillary Clinton has released from her private account, there is a conspicuous two-month gap. There are no emails between Clinton and her State Department staff during May and June 2012, a period of escalating violence in Libya leading up to the September 11 attack on the U.S. consulate in Benghazi that left four Americans dead.
A State Department spokesman told The Daily Beast that for the year 2012, only those emails related to the security of the consulate or to the U.S. diplomatic presence in Libya were made public and turned over to a House committee investigating the fatal Benghazi assault. But if that’s true, then neither Clinton nor her staff communicated via email about the escalating dangers in Libya. There were three attacks during that two-month period, including one that targeted the consulate. Keep on reading...