Hero: Oklahoma Gov. Mary Fallin orders some military in state to be armed... 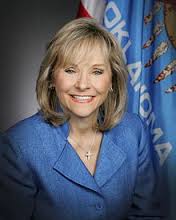 Doing the job Obama won't do...

Oklahoma Gov. Mary Fallin (R) issued an executive order late Friday authorizing certain full-time military personnel in her state to be armed following a deadly shooting the previous day in Tennessee.
“Four unarmed Marines were killed in what appears to be a domestic terrorist attack,” Fallin said in a statement accompanying her executive order.
“It is painful enough when we lose members of our armed forces when they are sent in harm’s way, but it is unfathomable that they should be vulnerable for attack in our own communities," she said.
Fallin's order applies to those on military installations in Oklahoma, including recruiting offices like the one where a gunman opened fire in Chattanooga, Tenn., on Thursday, before killing four Marines.