Meltdown: Keith Olbermann has lost nearly a third of his viewers in four months 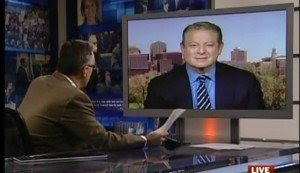 Al Gore needs to ask for a refund on the reported $10 million a year Olbermann receives as salary.


(Bnet) — Keith Olbermann is not in the witness protection program, but he might as well be. His show on Al Gore’s Current TV (America’s least watched network) has lost nearly a third of its viewers in four months.

Countdown with Keith Olbermann was a major draw when it was on MSNBC. On January 21, the network took a big hit when Olbermann announced on air that that would be his last show for them. Then in June, Current launched Olbermann and Countdown.

It was no surprise that Olbermann drew a big audience for its early shows — averaging 106,000 viewers a night. Unfortunately, by August it was down to 79,000. Last month’s numbers were even worse. Olbermann’s average was down to 46,000 viewers and was in no danger of coming close to breaking into the top 30 cable TV news shows. None of the top 30 is all that impressive in terms of audience. For the third quarter of this year No.1 Bill O’Reillyhad 2.8 million total viewers, while No. 30 — the 12 AM showing of Dr. Drew on HLN — had 435,000.

....and more specifically in the past month, because they ALL left to camp out at the various Occupy sit-in's......