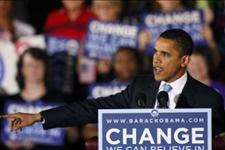 New research shows a high percentage (39%) of unemployed likely to switch away from incumbent party. That is enough to tip several close swing state away for President Obama.


The unemployed, long an afterthought in political campaigns, could emerge as a surprise swing constituency next year. For decades, conventional wisdom was that the unemployed did not vote as much as those with jobs.

But new research based on the current economic slump shows a different picture. People who have lost their jobs are nearly twice as likely to switch support from incumbents, according to Andrew Healy, an economist at Loyola Marymount University.

Examining local layoff notices around the 2008 election, Healy found in an national study that 39 percent of the newly unemployed who had backed the incumbent party in the prior election switched their support to the opposition, compared with only 20 percent of other voters.

That helped Obama win Republican-leaning states like Indiana in 2008, but could put him on the defensive this time in states like Nevada and Michigan, where jobless households could make up a substantial portion of the electorate.

During the last two elections as the economy has stagnated, those who have lost their jobs have actually voted at a higher rate than the employed, according to national research being developed by Matthew Incantulpo, a graduate student at Princeton University.