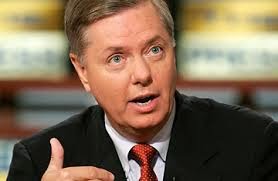 Unfortunately, calling for Obama's impeachment and actually having the balls to do it are not the same thing.


Sen. Lindsey Graham (R-S.C.) warned Wednesday that Republican lawmakers would call for President Obama’s impeachment if he released more prisoners from Guantanamo Bay without congressional approval.
Republicans worry Obama may try to shut down the prison camp unilaterally after congressional opposition has repeatedly stymied efforts to pass legislation to close it.
“It’s going to be impossible for them to flow prisoners out of Gitmo now without a huge backlash,” Graham said. “There will be people on our side calling for his impeachment if he did that.” Graham served as a House prosecutor during former President Clinton’s 1998 impeachment trial.
Congress tried to build in a safeguard against Obama making unilateral decisions on releasing terrorist detainees by including language in the National Defense Authorization Act requiring the administration to alert Congress of such moves at least 30 days in advance.
Obama did not follow that law when he swapped five senior Taliban commanders for Army Sgt. Bowe Bergdahl.