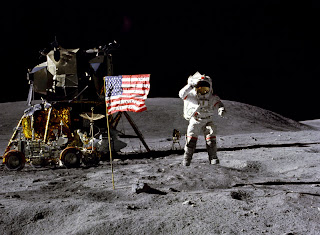 Image here.
President Obama, in his SOTU address,  touted NASA's accomplishments in the space race as an example of American innovation.


Half a century ago, when the Soviets beat us into space with the launch of a satellite called Sputnik, we had no idea how we would beat them to the moon. The science wasn’t even there yet. NASA didn’t exist. But after investing in better research and education, we didn’t just surpass the Soviets; we unleashed a wave of innovation that created new industries and millions of new jobs.

This is our generation’s Sputnik moment. Two years ago, I said that we needed to reach a level of research and development we haven’t seen since the height of the Space Race. And in a few weeks, I will be sending a budget to Congress that helps us meet that goal. We’ll invest in biomedical research, information technology, and especially clean energy technology -– (applause) -- an investment that will strengthen our security, protect our planet, and create countless new jobs for our people.

In 2010, Obama slashed NASA's budget killing our plans to return to the moon and the vehicles we need for manned space flight.


When the White House releases his budget proposal Monday, there will be no money for the Constellation program that was supposed to return humans to the moon by 2020. The troubled and expensive Ares I rocket that was to replace the space shuttle to ferry humans to space will be gone, along with money for its big brother, the Ares V cargo rocket that was to launch the fuel and supplies needed to take humans back to the moon.

There will be no lunar landers, no moon bases, no Constellation program at all.

Now, we are left hitchhiking with the Russians in order to get into orbit. The hypocrisy of President Obama is astounding.
Posted by Bluegrass Pundit at 6:42:00 AM

Well the Constellation was a mistake made by the Bush administration and the Shuttle program ran on for way to long. The problem as I see it is that we have lacked the drive for true exploration for some time now and have replaced it with reinventing the wheel instead. Its time to get off our ass, STS.

Astounding? No. Completely brains on fire infuriating? Oh my, yes.