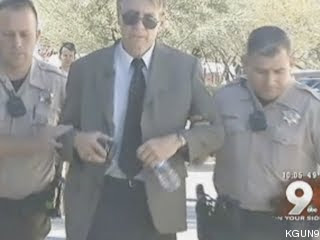 Oh, and their ears should be cut off and made into a necklace or something. Thank God Mr. Fuller is getting a psychiatric exam after shouting "You're dead" at a Tea Party leader.

(Fox Nation)- James Eric Fuller, 63, who was shot in the knee, had told The Post on Friday, the day before his arrest, that top Republican figures should be tortured — and their ears severed.

“There would be torture and then an ear necklace, with [Minnesota US Rep.] Michele Bachmann and Sarah Palin’s ears toward the end, because they’re small, female ears, and then Limbaugh, Hannity and the biggest ears of all, Cheney’s, in the center,” Fuller said.

Also on Friday, Fuller stopped by the home of gunman Jared Lee Loughner and told a neighbor he was going to forgive the shooter, The Associated Press said.