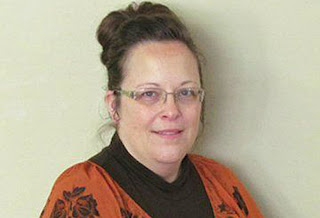 Personally, I think the Supreme Court shout have stayed out of it. Marriage licenses are a State issue. They should quit finding unicorns hiding in the 14th Amendment every time liberals want to change society. At this point, it is time for Davis to resign her position. She is out of options.


Davis’s lawyer didn’t return a request for comment. In a statement released Tuesday, she said, “some people have said I should resign, but I have done my job well.” She added, “I never imagined a day like this would come, where I would be asked to violate a central teaching of Scripture and of Jesus Himself regarding marriage. To issue a marriage license which conflicts with God’s definition of marriage, with my name affixed to the certificate, would violate my conscience.”
Davis has worked as a clerk in Rowan County for more than 25 years. In May 2014 — while serving as chief deputy in the clerk’s office — she narrowly won the Democratic nomination for the top job by 23 votes.