Sarah Palin: Obama should carry a “big stick instead of a selfie stick” 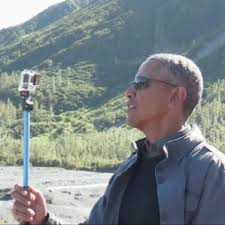 Sarah Palin still has it...


Former Alaska Gov. Sarah Palin said Sunday that President Obama should have carried a “big stick instead of a selfie stick” during his visit to her state last week amid recent reports of Chinese and Russian aggression.
“Let’s take his recent trip up here, which was pretty much a tourism jaunt, really,” said Ms. Palin on CNN’s “State of the Union.” “How about if he while he was up here he had as a president carried a big stick instead of a selfie stick? He could start publicly berating these countries that are sticking it to us with the messages that they’re sending.”
Five Chinese warships sailed into U.S. territorial waters in the Bering Sea near Alaska during the president’s visit last week to promote his climate-change agenda, while Russian bombers were intercepted July 4 off the coasts of Alaska and California.