Head exploding irony: WH spokesman Josh Earnest, "No public official that is above the rule of law” 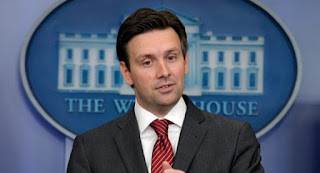 
White House spokesman Josh Earnest said Thursday afternoon that no public official, including the Kentucky county clerk who was jailed earlier in the day for refusing to give marriage licenses to same-sex couples, is above the law.

Kim Davis, a clerk from Rowan County, Kentucky, was found in contempt of court and taken into federal custody Thursday.
Earnest told reporters during his daily media briefing that he had not yet talked with President Obama about Davis being taken into custody.
“On principle, the success of our democracy depends on the rule of law. And there is no public official that is above the rule of law,” Earnest said. “Certainly not the President of the United States, but neither is the Rowan County clerk. That’s a principle that is enshrined in our Constitution and in our democracy and it’s one that obviously the courts are seeking to uphold.”