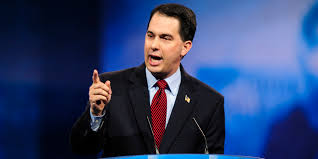 
Las Vegas — Seeking to revitalize his presidential campaign, Wisconsin Gov. Scott Walker plans to focus Monday on weakening labor by proposing to abolish unions for federal workers, create a national "right-to-work law" and eliminate the National Labor Relations Board.
At a Las Vegas manufacturer, he also plans to call for requiring all unions to hold periodic votes so workers can decide whether they should continue to exist, according to his campaign. He will also cancel President Barack Obama's Labor Day order that federal contractors provide paid sick leave and work to end policies requiring some salaried workers to receive overtime — saying in some cases they should get time off instead.
"I will check the power of the big-government special interests, empower individuals, and protect taxpayers," Walker wrote in a paper spelling out his plans.
"It's time to address the problems with collective bargaining in public service rather than tinker around the edges. As president, I will work with Congress to eliminate big-government, federal unions on behalf of the American taxpayer."