Obama: That JV team is now an "apocalyptic cult" 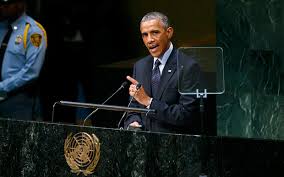 
President Barack Obama warned that “dangerous currents” threaten to create a “darker world” in a wide-ranging address to the United Nations General Assembly on Monday.
Obama slammed Syrian leader Bashar al-Assad as a “tyrant” and urged the international community to work together to defeat ISIS.
“There is no room for accommodating an apocalyptic cult like ISIL,” the president said, using an alternative name for the terrorist group.
Keep on reading…

Isn't the leadership of Iran an "apocalyptic cult" too?
Posted by Bluegrass Pundit at 4:28:00 AM