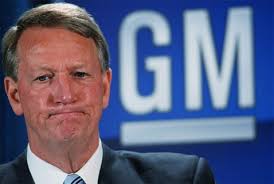 All three of the CEO's from GM, Ford and Chrysler drove hybrid cars to Washington to beg for bail out money. After getting criticized for flying into town in private jets last time, I guess they have learned something about public relations. I still think their chances of getting a bail out this year are slim. Polls show 61% of Americans oppose a bailout. Also, there do not seem to be enough votes in the Senate to pass a bailout at this time. I think a better option might be a prepackaged chapter 11 bankruptcy. GM and Chrysler are reportedly considering this as a last resort.

SOMERSET, Pa. (AP) - The head of the nation's largest automaker took perhaps the most important car ride of his life Wednesday, traveling 500 miles, mostly over highway through four states, to Washington, D.C., where he will ask Congress for a second time to save his slumping company.

Two weeks ago Rick Wagoner flew to Washington on a corporate jet. This time the chief executive of General Motors Corp. made the trip in one of his company's black hybrid Chevrolet Malibus, driving part of the way. He periodically made calls on his cell phone while in the passenger seat and wore sunglasses to protect from the glare of a sunny day.

Wagoner will be back in the spotlight Thursday and Friday, along with fellow CEOs Alan Mulally of Ford Motor Co. and Robert Nardelli of Chrysler LLC, when they appear before the Senate Banking Committee and the House Financial Services Committee to appeal for financial aid totaling up to $34 billion. Wagoner's plea will be the most desperate. GM submitted a plan to Congress on Tuesday that called for $18 billion in loans and warned that the 100-year old iconic American company won't have enough money to run its business without an immediate cash infusion of $4 billion...

When there's no more corporate jets for neo-populist pols to use for drumming up envy and resentment among the sheeple, what will Senators and members of the House of Representatives not named "Pelosi" hitch free rides on?