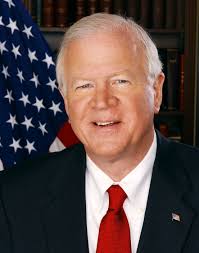 Sarah Palin campaigned for Chambliss in Georgia. I have to think that helped. She is the biggest star in the GOP at the moment. This win will help keep the democrats from the 60 vote filibuster proof Senate they crave. Hopefully, Frankin will not win against Coleman in Minnesota, but that race is very close.

ATLANTA -- Georgia's seemingly endless U.S. Senate campaign drew to a finish on Tuesday with Republican U.S. Sen. Saxby Chambliss claiming victory in a race that will sway the balance of power in Washington.

Chambliss faced Democrat Jim Martin in an extra innings campaign that drew national political heavyweights from both parties. The runoff between the former University of Georgia fraternity brothers was necessary after a three-way general election prevented any of the candidates from getting the necessary 50 percent.

What was at stake was significant: Democrats in the U.S. Senate are just two votes shy of the 60 needed to block Republican filibusters -- a key bid for power that would be immensely helpful as a Democrat heads to the White House for the first time in a decade.

Georgia is one of the two unresolved Senate races. In Minnesota, a recount is under way in a tight race between Republican Sen. Norm Coleman and Democrat Al Franken. The ballots must be tallied by Friday but the contest could stretch beyond that with a five-member board gathering beginning Dec. 16 to rule on ballot challenges.

Elections officials reported steady to light turnout since polls opened at 7 a.m., and no problems throughout the day. Polls closed at 7 p.m. A spokesman for Georgia Secretary of State Karen Handel predicted turnout would be between 18 and 20 percent, far less than the 65 percent who voted in last month's general election. Link here.

Chambliss is a good guy, look what he's done already. Did you hear the good news? Chambliss is making it better for us already! Most people don't realize how much money there is out there. During economic times like this, there is more money to be had than ever. Because of the bailouts and economy, lenders are bending over backwards to bail you out too. Believe it or not, there is people getting tons of cheap money nowdays to start businesses, buy homes, pay off debt, and more. Bailout is for YOU