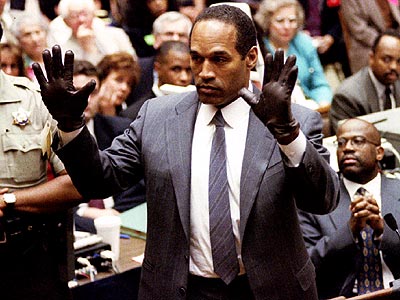 I am hoping for life. In my opinion, this guy is a psychopath and should not be playing golf in South Florida. He deserves to be in a prison cell for the rest of his life. I have heard that this judge is known as a hanging judge. The minimum OJ could get is thought to be six years.

Update: OJ was sentenced and could serve up to 33 years. Finally, the justice system works. Story here.

LAS VEGAS, Nevada (CNN) -- Former football great O.J. Simpson, convicted of armed robbery and kidnapping, deserves leniency in sentencing as he is a first-time offender who showed no criminal intent, his attorney says in court papers.
O.J. Simpson should receive a six-year sentence in a 2007 hotel room confrontation, his attorney says.

Grasso acknowledged in court papers, "Clearly Simpson was not using good judgment" during a 2007 hotel room confrontation over sports memorabilia.

Simpson could receive a maximum life sentence from Judge Jackie Glass on Friday. A pre-sentencing report recommended an 18-year sentence.

On October 3, a jury convicted Simpson, 61, and co-defendant Clarence "C.J." Stewart of 12 charges, including conspiracy to commit a crime, robbery, assault and kidnapping with a deadly weapon. Full story here.