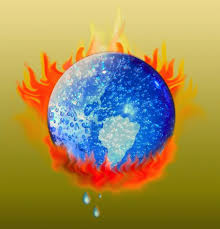 Just when you thought it was safe to listen to the global warming alarmists: they have missed their top 10 predictions for 2008. When all your predictions go wrong, it is time to formulate a new theory. I doubt that will happen though. The environmentalists are using the global warming farce as a tool to bludgeon rational people into submission. Many of our so called scientists are addicted to the loose money. They can not tell the truth until there is no other option.

GLOBAL warming preachers have had a shocking 2008. So many of their predictions this year went splat.

Here's their problem: they've been scaring us for so long that it's now possible to check if things are turning out as hot as they warned.

And good news! I bring you Christmas cheer - the top 10 warming predictions to hit the wall this year.

Read, so you can end 2008 with optimism, knowing this Christmas won't be the last for you, the planet or even the polar bears.

1. OUR CITIES WILL DIE OF THIRST

TIM Flannery, an expert in bones, has made a fortune from books and lectures warning that we face global warming doom. He scared us so well that we last year made him Australian of the Year.

In March, Flannery said: "The water problem is so severe for Adelaide that it may run out of water by early 2009."

In fact, Adelaide's reservoirs are now 75 per cent full, just weeks from 2009.

In June last year, Flannery warned Brisbane's "water supplies are so low they need desalinated water urgently, possibly in as little as 18 months".

In fact, 18 months later, its dams are 46 per cent full after Brisbane's wettest spring in 27 years.

In 2005, Flannery predicted Sydney's dams could be dry in just two years.

In fact, three years later its dams are 63 per cent full, not least because June last year was its wettest since 1951.

In 2004, Flannery said global warming would cause such droughts that "there is a fair chance Perth will be the 21st century's first ghost metropolis".

In fact, Perth now has the lowest water restrictions of any state capital, thanks to its desalination plant and dams that are 40 per cent full after the city's wettest November in 17 years.

Lesson: This truly is a land "of drought and flooding rains". Distrust a professional panic merchant who predicts the first but ignores the second.

2. OUR REEF WILL DIE

He's advised business, green and government groups, and won our rich Eureka Prize for scares about our reef. He's chaired a $20 million global warming study of the World Bank.

In 1999, Hoegh-Guldberg warned that the Great Barrier Reef was under pressure from global warming, and much of it had turned white.

In fact, he later admitted the reef had made a "surprising" recovery.

In 2006, he warned high temperatures meant "between 30 and 40 per cent of coral on Queensland's great Barrier Reef could die within a month".

In fact, he later admitted this bleaching had "a minimal impact".

In 2007, he warned that temperature changes of the kind caused by global warming were again bleaching the reef.

In fact, the Global Coral Reef Monitoring Network last week said there had been no big damage to the reef caused by climate change in the four years since its last report, and veteran diver Ben Cropp said this week that in 50 years he'd seen none at all.

Lesson: Reefs adapt, like so much of nature. Learn again that scares make big headlines and bigger careers.