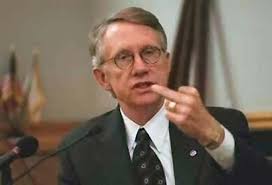 I will not miss this guy if he loses in 2010. He has led the fight against victory in Iraq. He has led the Senate to a 9% approval rating. His personal approval rating is only 38% in Nevada. I can not understand how the Democratic Party made gains in Congress with Harry Reid and Nancy Pelosi as their leaders. Unfortunately, most people who voted democrat in the last election cycle don't know who their leaders are or what they stand for.


About a year before the 2008 elections, NBC’s Chuck Todd wondered if Republican Senate Minority Leader Mitch McConnell was about to face the same shameful defeat that Senator Tom Daschle faced in 2004 when he was the Minority Leader of Senate Democrats. He asked, “Could McConnell get Daschle-d?”

Fortunately for Republicans, the answer was “no.” McConnell successfully held his seat this year, albeit barely. So pundits are already looking toward 2010, where they see vulnerability again. But it’s not a Republican they believe may get “Daschle-d.” This time, it’s Democrat Senate Majority Leader Harry Reid of Nevada.

Many Americans don’t know who Reid is, so allow me to remind you. He’s the senator who turned his back on our military and declared we’d lost the war in Iraq in April 2007. He’s also the senator who partnered with Speaker of the House Nancy Pelosi to oppose offshore drilling when we were paying four dollars a gallon for our gasoline just a few short months ago.

Yes, he’s the same senator who mocked George W. Bush’s low job approval numbers yet now presides over a Democrat-controlled Senate that has approval numbers at 9% according to the latest Rasmussen polls. No wonder The New Republic is reporting that Senator John Cornyn, “the newly-minted chief of the National Republican Senatorial Committee,” wants to make Reid’s senate seat the central target for Republicans in the 2010 elections.

To be fair, Reid’s personal approval numbers are a bit higher than those of Congress as a whole. He can boast of a whopping 38% job approval rating. But he ought not boast too much, because this means 62% of the people don’t approve of the hyperpartisan job he’s done thus far.

Of course, Reid doesn’t believe his low approval numbers are his fault. Rather, he blames them on Bush’s low numbers. Stop laughing -- I’m being serious. Read more here.