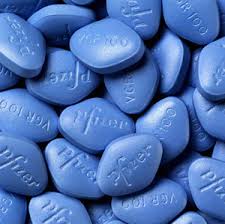 It is Viagra. Apparently, Afghan tribal leaders will give up the Taliban for four hours of blue pill fun. Do you think the Afghan women run into the mountains and hide for a few days after the American troops visit now?

Report: CIA Uses Little Blue Pills to Entice Afghan Warlords
The growing Taliban insurgency has forced the CIA to get creative in how they obtain certain information from Afghan warlords and tribal leaders.

In an effort to win over fickle warlords and chieftains in Afghanistan and get information from them, CIA officials are handing out Viagra pills in exchange for their cooperation, the Washington Post reports.

"Whatever it takes to make friends and influence people - whether it's building a school or handing out Viagra," an agency operative, speaking on the condition of anonymity, told the Post.

The growing Taliban insurgency has forced the agency to get creative in how they obtain certain information from Afghan warlords and tribal leaders, including Taliban movements and supply routes.

CIA operatives use everything from toys and school equipment to tooth extractions to their advantage and note that if Americans don't offer incentives, others, including Taliban commanders, will. Link here.