If the waste of taxpayer money on Solyndra steamed you, wait until you hear about SunPower Corp. 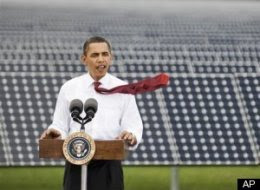 SunPower Corp. got over twice the money Solyndra did in order to create 15 permanent jobs at an astounding cost of $80 million in taxpayer money for each job. Oh, and they are teetering in the edge of bankruptcy.


(Fox News) — With the Solyndra scandal still swirling, the Obama administration is under pressure to reveal the financial condition of the solar companies that received $4.75 billion in similar federal loan guarantees on the last day of the program.

Republican lawmakers on two House committees are seeking details about the loans given to First Solar, SunPower Corp. and ProLogis. Of those three companies, troubling financial revelations have emerged about SunPower, which received a $1.2 billion loan, more than twice the money approved for Solyndra, which filed for bankruptcy last month after receiving a $528 million loan.

The Energy Department says on its website that the $1.2 billion loan to help build the California Valley Solar Ranch in San Luis Obispo County, a project that will help create 15 permanent jobs, which adds up to the equivalent of $80 million in taxpayer money for each job.

In April, the Energy Department gave SunPower a conditional loan guarantee, even though the company was receiving financing in the capital markets. Shortly after the conditional guarantee, French energy giant Total bought a majority ownership in SunPower and extended a $1 billion credit line to the company.

But SunPower posted $150 million in losses during the first half of this year and its debt is nearly 80 percent higher than the market value of all its outstanding shares. The company is also facing class action lawsuits for misstating its earnings.

I just cant take hearing any more of this!!!! AAArrrggghh!!! I'm glad I know it, really I am. Its just that I didn't think Obama's decisions could get any worse!