Actual Good News: UAW Throws In The Towel At Volkswagen Plant In Tennessee 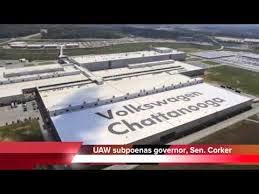 My guess is they didn't think they had a snowballs chance in hell with a re-vote.


The United Auto Workers dropped its appeal of a worker vote against unionizing at a Volkswagen plant in Tennessee, a move that the union said should put pressure on Republican politicians to quickly approve incentives the German automaker is seeking to expand its lone U.S. assembly plant.
The prolonged fight over labor issues at the Chattanooga facility appeared headed for a lengthy National Labor Relations Board appeal until the UAW announced an hour before a scheduled hearing that it was ending its challenge. The February vote went against the union 712-626.
Some GOP lawmakers had blamed the appeal for holding up expansion plans at the plant — and the UAW says that perceived obstacle is now out of the way.
"Now they need to step up and do what's right for VW and those workers over there, get the incentives without any strings attached," UAW Regional Director Gary Casteel said in a phone interview.
The appeal had focused on public statements from U.S. Sen. Bob Corker, Tennessee Gov. Bill Haslam and other GOP officials that the union argued raised fears among workers about the plant's future if they voted to organize.